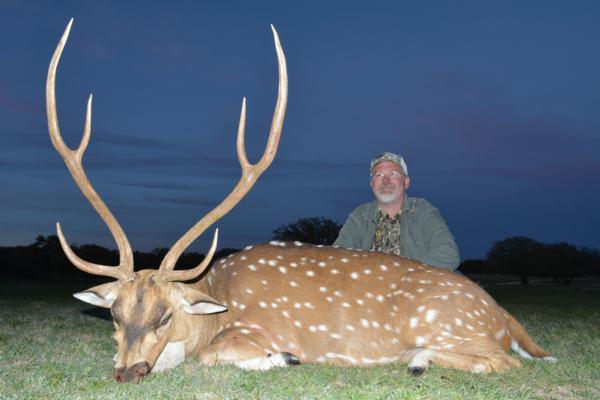 Hope everyone is having a great Spring/End of Winter!

What a great end we had to another awesome season. January and February was a busy time at the ranch. We had some fun hunts to end the main season, good population surveys, and started on some new projects!

We are starting to get ready for Turkey Season as well as next seasons hunts. Below is a little summary of whats been happening so far in 2017 at the Cross Oaks Ranch. There is also some info on available hunts for next season, which are going fast!

Our First Hunt of 2017 was with Chris McDonald and Larry Bivins. Both have hunted with us several times and been paired together on a few trips. Chris and Larry took a few does on their hunt and Chris also got a pig. Larry also brought his wife Tammie along this year. She enjoyed relaxing around the lodge and knitting! Thanks to all of them for coming back to see us and hope to see them again soon!

Next up was Obert Blaisdell, His Son, and Nephew. They have been out to see us multiple times now and always a great group of guys to be around. They were on a meat hunt again this season and took whitetail does and got a couple pigs. They also cooked us some Awesome Bouidin Balls one evening! Thank you guys for everything and for another great hunt this year!

Our Next Hunt was a meat and exotic hunt with 4 hunters. Randy Wimberley and Al Kissell have each hunted with us 3 times now on meat hunts. Anthony Schneider came to see us from Florida with Dustin Vick on an Exotic Hunt. Both groups combined made for some great conversations around the fire. Randy was able to get 2 Does and a pig. Al Took 2 whitetail does and 1 blackbuck doe. Anthony got a really nice old Axis buck! Dustin took a management Blackbuck with his bow! Anthony and Dustin also did a little varmint hunting to kill some time at the end of the hunt. They were able to get a few fox and trapped a coyote. A perfect hunt to end January for us.

We had some new hunters to the ranch on our next hunt. Frank, his son Bernardo, and their friend Mario. They had a great hunt taking 6 whitetail doe and 1 blackbuck doe. What a really enjoyable group to be around. We had a blast getting to know them and hope to see them back again soon. Thanks Guys!

Our next hunter Michael Danilovich from Illinois came down for a late season hunt. This was his first time to hunt at the ranch. During his stay he took an awesome Trophy Blackbuck, one of our best yet! He also took a management whitetail buck and a whitetail doe. Great Job and thanks for coming to give us a try. We Look forward to next time!

Finally to end our main season we had our good Friends Blaine, Casey Shepherd, and His Dad Jimmy. Blaine came in before Casey and took several pigs and a blackbuck doe on his hunt. Casey took a huge Axis Buck on his hunt! Not to mention he got it the first day, which all of our hunters know is pretty lucky on Axis! Thanks to all of them for coming and for a great time to end our big game hunting for this season!

It was another successful season at our Texas Hunting Ranch! We thank all of our hunters for coming to see us, especially those who have been many years in a row. We really appreciate all of you!

We have some great things in store for the 2017-18 Season. First we have to finish up this season with our Turkey Hunt next month. We also have several exciting projects going on for next seasons hunters to enjoy. We are currently building 3 new buildings. Two of the buildings will hold 4 bedrooms with private bathrooms in each room. The other building will be a new dining room and kitchen facility! We have outgrown our current space and look forward to the added areas. There will also be a new fence around the lodge, replacing the old one. Some other minor improvements will also be made this year to the current facilities and ranch.

Now is the time to start planning your trip for Next Season. We had some great numbers from our game surveys last month. 2017-18 should be an awesome season! Many of our hunts have already been booked, below is what we currently have available for next season. Book your next Texas Whitetail Hunt Or Texas Exotic Hunt Today!

Meat Hunts- Whitetail Does and Exotic Does

If you have any questions or interest please email us at Info@CrossOaksRanch.com Or contact us using our easy form Click Here

Thanks for reading and check back soon for more updates!