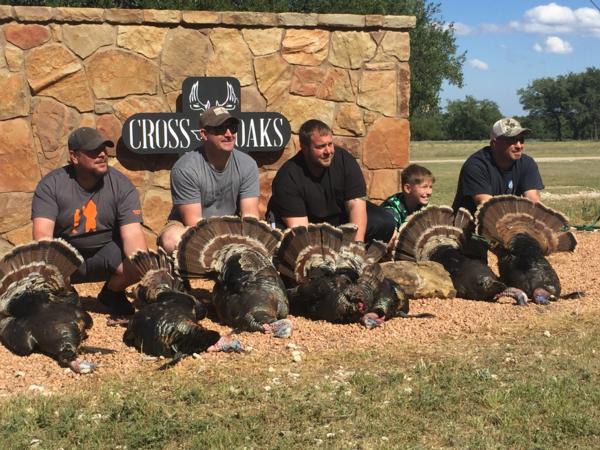 What an awesome Spring its been at the Cross Oaks Ranch! Not to long ago we completed our Spring Turkey Hunts for this season. We have also been very busy getting some new projects done around the ranch, along with our normal Spring work.

We had an unbelievable Turkey Hunt this season! Our great friends from Colorado were back for round 3 this year and third time was definetely the charm. Almost all of them have been strictly bow hunting the past few years and of course bow hunting for Turkey sometimes presents some challenges and dissapointments. While we had some success previously, some of the bad breaks and misfortunes paid off in experience. They definetely came out swinging and prepared this time to get some revenge on these Rio Gobblers!

As you can see from above these guys really put a good woopin on em this year. Some epic shots were made with the bows and some of them even bagged an extra Bird! One of the members of this group made his debut hunting for the first time and he did a great job! Easton Silva got his first ever trophy animal, an awesome Gobbler! Easton also got his first pig during the hunt! We are all so proud to have watched him grow up the past few years. His father Jesse was able to be there with him and we know he is a very proud Dad! We are all very proud of Easton and congradulate him on a job well done. Soon he will be a Ranch Pro just like his parents!

Eastons mom, Jamie Silva, also had a great hunt. She took an awesome Iranian Red Sheep Ram. It scored out as a Gold SCI award and is the unofficial #14 all time! Great Job Jamie!

Next up it was Dad's Turn! Jesse Silva made a great shot on a bird with his bow and finally got his Rio Gobbler. Congrats to Jesse and his whole family on a great hunt!

One afternoon early in the hunt, Bobby Guillory had a great sitting! With a jake decoy sitting out, 3 gobblers came in and circled the decoy for several minutes. They were in full attack mode and before long the decoy was their personal punching bag. During this time Bobby drew the bow back and connected on a nice Gobbler! Then the other 2 started attacking it! Bobby then made an incredible shot and got a 2nd Tom. Great job Bobby and what an exciting hunt it was!

Jeremy Guillory also had success on the turkey this year. He was able to get 2 birds as well, on 2 different sits. Both were great shots with his bow and great gobblers. Good job Jeremy once again!

Later in the hunt Jeremy M. was able to get a nice Gobbler with his bow! Great Shot Jeremy!

What a great Spring Hunt it was. Thanks again to this awesome group for all the years and memories! We look forward to next time!

Besides hunts we have always been busy around the ranch with several projects. Our current constuction on the new lodging and dining room is coming along. We look forward to finishing in the next few months and sharing it with all of our guests this year. We also have some little projects going such as clearing some brush to make some areas a little more accessible. We will get you some pictures once everything is completed!

It should be another great season this fall and we are already counting down the days. If you need anything shoot us an email at Info@CrossOaksRanch.com. We still have some opportunities for Texas Whitetail Hunts and Exotic Hunts

Thanks for reading and have a great summer!